The Tina River Hydropower Development Project is delivering more power to the people in Central Guadalcanal after the official green light was given today for a 11lkV high voltage (HV) extension and 415V low voltage (LV) distribution network at a signing ceremony in Honiara. Communities will soon see their homes light up thanks to the much- anticipated Community Benefit Sharing Project (CBSP) which sees construction of a HV extension and LV distribution network running along the 9km road from Black Post leading up to the Tina community in the Bahomea Region.

The signing of the formal collaboration agreement between the Ministry of Mines, Energy & Rural Electrification (MMERE) and Solomon Islands Electricity Authority Solomon Power, marks the next significant milestone for the Tina River Hydropower Development Project. The construction of the HV extension and LV distribution network is one of the flagship programs under the Community Benefit Sharing Project (CBSP) and will benefit approximately 141 houses who will now be connected to the Honiara grid.

Deputy Project Manager Fred Conning said it is a huge achievement for Tina and acknowledged the hard work of the Community Benefit Sharing Project team in collaboration with the communities and partners. “This is yet another significant milestone for the project that will greatly benefit communities of the Tina River Hydro Development Project site now and into the future,” he said. Mr. Conning explained during the consultation phase of the project, having access to electricity was among the top requests submitted by the communities emphasizing the Project is pleased to be able to now fulfill that request.

The signing of the agreement outlines what is expected of Solomon Power as the implementing agency responsible for feasibility, designing, construction and commissioning of the HV extension and LV distribution network. Chairman of Solomon Power David K.C. Quan O.B.E in his remarks said the Project cost is around SB$6.7 million and will be in construction for a duration of 111 days for HV extension and LV distribution network excluding service line connections and house wiring. “Solomon Power is honoured to announce that our scope will also include energising a total of 141 house connections by providing wiring connections inside these homes as part of this funding arrangement. Once again, this will not only achieve our goal of expanding the electricity grid but it will be a major boost for our local communities and the greater Solomon Islands economy.” he said. He emphasised this particular project is about bringing the benefits of energy from the larger Tina River Hydro Project to these communities and expanding SP’s network in the Guadalcanal province. 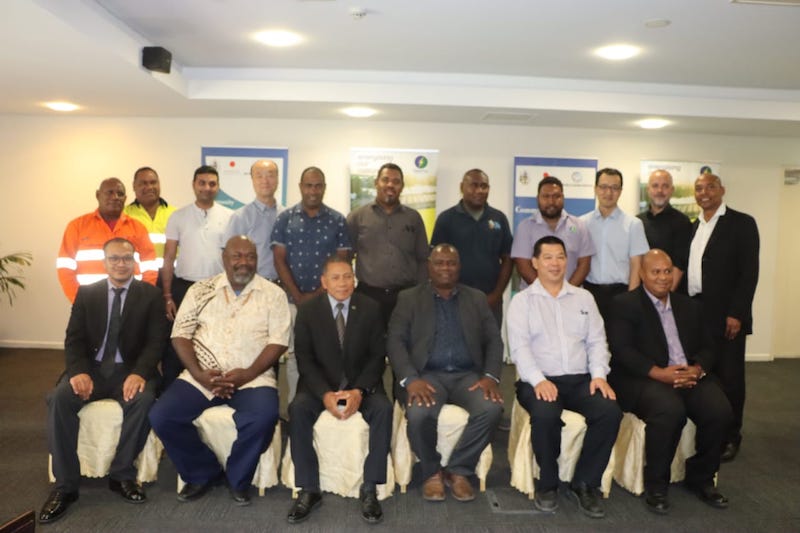 The Team overseeing the signing of the agreement

The collaboration agreement signing is a binding document signifying the delivery of grant funding from the Japanese Social Development Fund (JSDF) through the World Bank for Solomon Power to implement the electrification development that will extend the existing network at Black-post to Tina village.

Access to power for the first time in these communities will be truly life changing and now every day essential activities for residents, such as children being able to study for school effectively or women prepare and store produce to sell at the markets, will be made easier.

Speaking at the ceremony, the Minister of Mines, Energy and Rural Electrification (MMERE) Bradley Tovosia, acknowledge development partners for providing the necessary technical support during the strategizing phase of the project. He also encouraged people living in and around Tina communities to treat Tina Project as an asset. “My good people from Tina and surrounding communities, count yourself as the most privileged in the country, as this infrastructure will be amongst the first of the many that will come because of the Tina Hydro Project. Treat the project as an asset of the community and the constituency,” the Minister emphasized.

Work on the transmission line will commence this month with local construction contractor ANNCITY Power Solution.